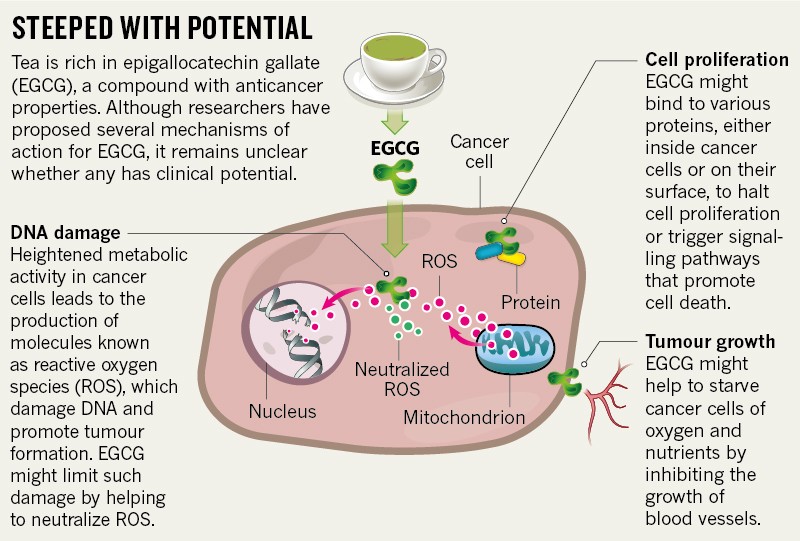 In terms of popularity as a beverage, tea comes second only to water. In many parts of the world tea is the drink of choice, not only in homes but also at social gatherings. Green tea is the dried product of the plant Camellia sinensis. Depending upon the level of processing, tea is sold as green, white, black and oolong. Green tea and white tea are less processed. Green tea is known to have excellent health benefits including cancer prevention.

Green Tea as an Antioxidant

Research on Green Tea and Cancer

Scientific data available on cancer prevention studies on animals are very impressive. Scientists treat either tumor bearing animals or cancer cells with green tea extract or black tea or tea polyphenols or EGCG, and analyse the outcome. Most of these studies suggest green tea acts as a cancer prevention agent. Animal models of lung, oral-digestive tract, colon and prostate cancer all showed beneficial effects of green tea or its constituents against cancer.

Reports also show that green tea selectively activates or inactivates certain genes in cancer cells. Of course, there is no guarantee if some drug works in animal models it should also show a similar effect in humans. Moreover, the quality and quantity of green tea and its constituents used in animal experiments may not always reflect the same level humans consume on a daily basis.

At least so far, the results of human studies on the effect of green tea on cancer are mixed and inconclusive. Some studies show positive effect and some not. A Japanese study reports consumption of ten cups of tea every day could prevent cancer. This study also suggested a synergistic effect of tea when supplemented with a cancer preventive drug. Another study showed that consumption of 600mg of green tea catechins daily for 12 months during early stages of prostate cancer arrested further growth of cancer. Studies also suggest factors like smoking, alcohol consumption and genetics influence the effectiveness of tea on cancer.

No comments to show.